Lucinda stood in the gallery and sipped her wine as she gazed at the veduta. The landscape was 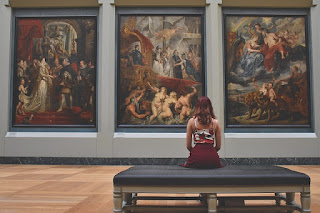 timely, done in earthy oils. The artist expressed great elocution in his work. As she moved on through the gallery, to another painting. This one seemed so real, as if the man standing at the parapet could tumble out of the work.

Applause erupted as the artist raised his glass in a toast to critic Phillip Glazer. Pronounced fee-leep glass-a-er. The schmuck probably wasn’t even French. Lucinda had a premonition that all the artist’s efforts to impress the great critic were all a fallacy.

In her mind’s eye she could picture the review in which uppity Fee-leep would eviscerate the young artisan. At the very least sever an artery.

With a sigh, she moved into the exhibits. Lucinda couldn’t help a quiet laugh as she passed a couple. The gentleman was trying to impress his lady friend, badly. He stood back from the painting with a distant expression. Then proclaimed that the artist was ocular. Oh yes, the young man had a vision alright. A vision of getting that petite blonde between the sheets.

Next was a classic view of the medieval hero Robin Hood. The outlaw stood in disguise lined up with the other archers. Arrow knocked ready to fly true and win the legendary contest. With a grin, she entertained the notion of being able to step into the painting and blow in his ear as he let fly. Let’s see him make that shot.

An odd coupling by the same artist the next painting held a limo in the desert. A man dressed forties gangster style stood against the side of the car. He might have been attractive but for the horrendous scar down the side of his face. Something caught her eye and she started to laugh at the artist’s morbid sense of humor. A man’s shoe lay just under the edge of the limo’s trunk. The scared man wasn’t alone in the desert after all.

The next piece was a collage of calendars. It was quite impressive how he managed to encapsulate so much history into the piece. There was a calendar from the year JFK was assassinated the date circled in red. Little pictures of historical events speckling many of the dates.

Lucinda actually liked the landscape. The beach with its white sands that seemed to stretch on forever. Palm trees bent to shade a group of sunbathers as the waves licked at their feet. A dog with a Frisbee in his mouth ran along the shore, which made her a smile.

Hanging next was a peep inside a brothel. Ladies enticed men with their unmentionables and pretty smiles. They hoped to make a few dollars that night. Some danced, others drank, a few couples locked in romantic endeavors but all laughing and gay. All but one. At the corner window seat a woman with long golden locks stared at the moon. Her sapphire eyes held a longing, perhaps of dreams lost.

Lucinda sighed as someone behind her made loud comments. She had lost patience with the crowd growing in number and noise. The wine no longer able to quench her thirst she poured it into the potted tree. Lucinda glanced around as she slipped the flute with its gallery charm that dangled from the stem into her purse. On her way out, she over heard Fee-leep tell another patron an artist should have stuck to flipping burgers.

The valet brought her car and Lucinda tipped him before she drove away. On the way home, she listened to Mozart drift through the speakers. Once inside her apartment the illusion was shattered.

She toed off her shoes then walked to the wall by her dining table. Lucinda pulled the flute from her purse and set the glass on a shelf turning the charm to dangle from the front.

She stepped back and looked at her collection. There was a glass from almost every gallery in and LA. Since the move to , Lucinda had found the posh galleries a lot of fun. It was her little escape from her mundane life as a post office clerk.

Once a month she would dress to the nines walking among the beautiful people. Experiencing the world in their eyes for a couple of hours, tasting fine wines, foods she would never be able to afford. Walking to her bedroom Lucinda took off her dress she’d saved for six months to buy it. There were three fine gowns in her closet just for her little trips.

As she slipped on the less glamorous cotton pajamas with coffee and kittens imprinted, Lucinda thought about the gallery and all she had seen tonight. She rested her head on, her pillow Lucinda made note to check the listings for next month so she could plan her next gallant night.

Email ThisBlogThis!Share to TwitterShare to FacebookShare to Pinterest
Labels: A to Z Blog Challenge, Flash Fiction

Readers, we need YOU!

Can Readers Participate in Blogs?

Absolutely! Readers, we need YOU!

Authors Rose Kelly and Elise VanCise will be penning a continuing series together as part of the A to Z Challenge that begins on April 1st 2019.

Written by Rose Kelly in 2012 and originally titled "Torn Paper", the short, standalone piece received positive feedback and requests for the story to be continued. Rose and Elise will continue the story, now titled “Then He Was Gone”, as a series for the A to Z Challenge and each chapter will be inspired by a letter in the alphabet.

And now for the twists:

Reader Votes
We thought it would be a fun writing experiment to include aspects of the story that have been voted for by our readers. We’re starting with the poll below that will ask readers to vote for the main character’s names and the state where the story will be set.

This won’t be the only choice we will ask you to make! Periodically, we will be posting polls and getting your input for the story. Links for Gladiator’s Pen, RoseWrites, and the polls will be included with all posts.

You’ll have to read the blogs to find out if your vote appears in the story! This poll will end on March 29th, 2019. So, what are you waiting for! Vote below! 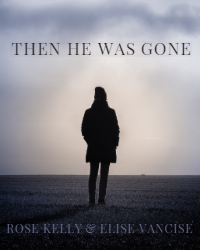 Then He Was Gone

After realizing the mistakes that caused her relationship to fail, a woman travels across continents in search of a second chance with the love she lost.

“Very nicely crafted. The story elicits sadness and a sense of loss, yet at the same time has the underlying sense of hope, and feelings of things that may be repaired and put right…The story just begs to be given closure.” -Steve Green

“I have been swept away in your world and really want to know more! Great emotional feeling within this piece!” -C.M.Brown

Email ThisBlogThis!Share to TwitterShare to FacebookShare to Pinterest
Labels: Blogging from A to Z, Fiction, Poll, Reader's Choice